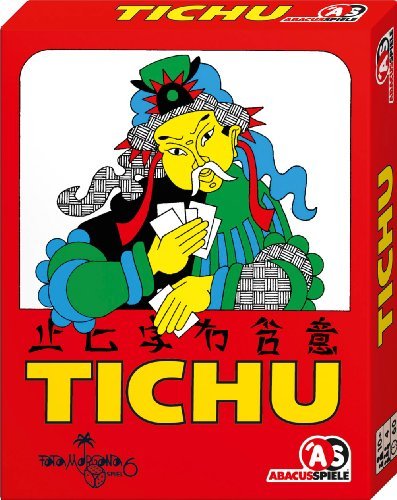 I’ve got a tech post primed to talk about some actual development work but I wanted to start talking about and responding to games I’ve been playing through a mostly mechanical lens. And to start, I want to talk about Tichu.

I’ve been playing a lot of Tichu recently. Not only this, but I’ve been actively bringing it to the table with friends when we sit down to play games. I’ve even started bringing it to work to try to try and get a few rounds in over lunch (which so far has been a success).

This is pretty unlike me - I’ve never been a big fan of card games, and especially so with ones that have more “traditional” types of rules/mechanics. This stems from a few things, but one of the main issues I have with this type of game is that, given any hand of cards, there is often an optimal card to play at any given time. Not playing this card can easily draw ire from your partner, but can also garner strange looks from the table.

Which begs the question, what game is actually being played if there is no choice? Without going too deep, I think a lot of card games have a greater, non-game related metagame happening, where the game is meant to be a conduit for conversation vs. the end in and of itself. Coming from a videogame background, this is surprising: the idea that a game isn’t (and doesn’t strive to be) totalizing, but instead is okay taking a backseat to discussions of the weather. This isn’t bad or worse in any way, but just a different model from what I understand games to be.

That said, I do like that totalizing property, I want at least some of that depth when I play any game and traditional card games seem rarely ever to dip into that sort of depth.

Which I brings us to Tichu! And let me tell you, I really like Tichu!

Everything I said above is true about Tichu. Also everything I said above doesn’t necessarily apply to Tichu in the same way, due in part to it’s pretty robust (for a card game) ruleset and injection of some tilt factors that can fundamentally disrupt hands and strategies on a play by play basis.

To try and abbreviate the rules, it’s similar to a game like Bridge or President where the fundamental goal is to win tricks, with card play going clockwise until everybody passes and the last person to play wins the trick. Simple right?

But Tichu wouldn’t be Tichu without a few rules on top of this core concept. The deck itself a standard deck of 52 cards, but Tichu offers the addition of four “special” cards, each that has a special ability and whose implications of play need to be understood thoroughly before effectively playing them. I’ll speak to one of them, The Mahjong, individually below.

The Mahjong is the single lowest card, holding a value of “1”. It’s holder plays first, which means having the Mahjong means you have an opportunity to play the Mahjong, which, because any card played needs to be higher than the previous played card, doesn’t come often. This in and of itself is interesting, as the player with the Mahjong already must make the decision to play it or not, with that decision then dictating how the rest of their hand should be played.

But as is the case with Tichu, that’s not all. Right before the start of play, every player must pass every other player a card from their hand. This means that, should you have gotten the Mahjong on the initial deal, you’re now faced with a large decision before the game has even started, which is “who should go first?”. Giving it to your opponent to your right means that you’ll get second play and possible force them to play more aggressively than they were intending. Or do you give it to your partner (Tichu is normally played with four people, with teams of two, with teammates sitting across from each other so play is Teammate 1, Opponent 1, Teammate 2, Opponent 2, and then from Teammate 1 again) and give them a chance to lead — maybe they had a great hand and the lead can secure them an easy victory. Or maybe this pass is a burden to them, and they were expecting you to carry them (like all card games, table talk isn’t allowed).

Unlike traditional card games, in these situations, the questions the card poses has no right answer — sure there are choices that are likely better than others, but by injecting a game who, on its face is very traditional, with a very small amount of spice, the possibility space of the game grows immensely.

It’s to the power of Tichu as well that the game does not actually rely on these special cards, and they don’t subsume the basic structure of the core game. Instead they complement it, acting as a way for players to make more decisions with the cards in their hands then to feel like their fate and course of play are totally set.

For a brief rundown of the other special cards: The Hounds pass the lead to your partner, The Dragon is worth 25 points (out of the games 100 total up for grabs) and is the highest single card, but when the trick is won with the Dragon the trick and its points go to an opponent. The Phoenix is worth -25 points, and acts as a wild card. It can also be counted as half a point higher than the card it’s played on. So if an Ace is played, and then a Phoenix on top of that, the Phoenix is worth “Ace and a half”.

Some of those rules are likely head scratching, but for the sake of brevity I don’t want to delve too deep into them because really understanding what makes them work and why relies on knowing the full ruleset of Tichu, which I don’t want to spend too much time lingering on here.

I think in reading their general rules though, you can see some of the strangeness and surprise in the game. Why would you play a card like the Phoenix if you lose 25 points? Why would you play a Dragon if you give the points to your opponent? However, everything fits together in surprising ways. You start to learn that, because the last player to go out (gets rid of all their cards) gives their won tricks to the first person to go out, it’s possible that the Dragon trick with all the points can come back to your team. So when you play the Dragon you want to give the trick to the person who seems least likely to go out first.

It’s little nuances like this that make Tichu feel dynamic when placed alongside standard trick taking games. The lead of any given hand shifts around, the played cards dictate the cadence of the game, and other factors entirely that I haven’t touched on can upset a whole hand and provoke a reconsideration of what you were planning to do.

In Tichu, the decision of when to play a card isn’t up to a specific “correct” time but rather a “gradient of opportunity” that is constantly shifting based on what other players are doing. A hand that looked strong at the start can easily be undercut by other players’ actions and lead you to reconfigure what you’re planning to do before you’ve even played a single card. A massive straight that looked like it would handily give you the win now feels like dead weight because, in not be willing to initially break it up to play some cards, you’ve now got 5 cards more than everyone else with no clear path to dumping them.